The Eve Brook Scholarship Fund marked its tenth anniversary year by raising , £17,500.00, in a series of events celebrating the work of the fund and the young people it’s helped.

In January, the Fund hosted a dinner to celebrate beneficiary Anthony Wesbter’s graduation in fashion design from Birmingham City University.

In April, Birmingham solicitors’ Anthony Collins hosted an evening reception marking the anniversary. Jointly chaired by five Fund beneficiaries, around 80 guests were welcomed by Birmingham’s Lord Mayor, Councillor Randal Brew. The keynote speaker was Fund patron Baroness Helena Kennedy QC, who gave an address In Defence of the Public Realm at Eve Brook’s memorial service in April 1998, when the Fund was launched.

Baroness Kennedy said: “Young people so often have swallowed the idea that ‘I’m not sure I can do this’. And the thing about getting the scholarship, is that it’s a vote of confidence. It’s saying to the young people, we believe in you”. 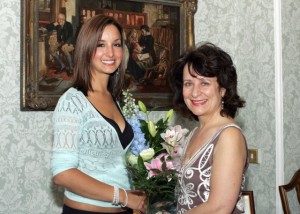 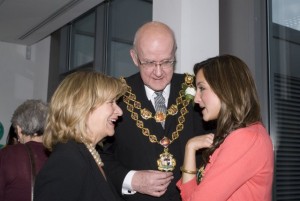 Impressionist and comedian Steve Nallon auctioned a range of donated paintings, some of them donated by Birmingham summer arts project Gallery 37, and including a piece by fund beneficiary Charlene Clempson. The ten pieces raised £1,635.00.

In June, Fund Trustee Judy Wenban-Smith hosted a garden party, carrying on a tradition of commemorative summer events which began shortly after Eve’s death. The Fund launched a new range of merchandise, as well as selling copies of our Christmas card collection (in poster and pack form), raising over £3,200.

We also launched our promotional DVD, presented by actor, director and writer Simon Callow, and produced by Birmingham University’s Centre of Excellence in Interdisciplinary Mental Health.

As fund chair David Edgar said at the April event, “we’re currently giving major support to more young people than we’ve supported in the previous nine years put together”. If the Fund is to carry on helping young people, it will need just as much support in the future.